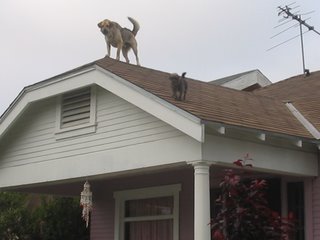 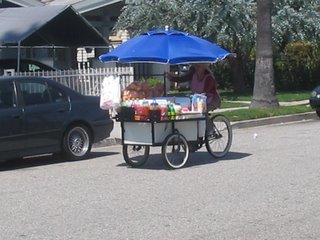 I'm a walker. Out with the son, out late with the dog, sometimes with others.


I certainly get barked at, by dogs, behind fences, in front yards. If a dog's going to bark at anything that moves, s/he ought be kept in the property rear. They're still likely to bark, just at less, heard by fewer.

But dogs on a roof?! This canine pair had me spotted a block away. I've heard of early detection systems, but this is ridiculous and inconsiderate. Particularly as neighboring dogs, cued as if were, continued the shepard serenade.

Here's another intrusion: the peddling pork rindadora. Apparently she thinks there's a corollary between horn volume and sales volume, because she works the handle bar horn like it's a blood pressure cuff.

What am I angling for? Noise ordinances. New York City just updated its code, with special mention of Ice Cream trucks and monster-bass car audio systems.

If Koch could enforce the pooper scooper, I figure Bloomberg's got a shot with Mr. Softee.