Admittedly, Los Angeles is credited with a higher percentage than some municipalities--Denver, Detroit, Cleveland, San Antonio, Charlotte, Oklahoma City, Memphis, Tampa--stop me when I come to a burg with world class aspirations or standing.

The city of angels has had frequent opportunities to add to this total, but in pursuit of the all mighty sales tax dollar, and without the push of the hill-centric (or white suburban subdivision centric) eco-activists, promising sites like the Plant, Hollywood Park, and the Grove have instead been transformed into big box retail ghettoes. Despite several economic studies that promote the revitalizing power of parks, council persons are generally more interested in the short-term sales scape than the long-term green scape, and the re-election insuring campaign contributions that convienently accompany big development deals. 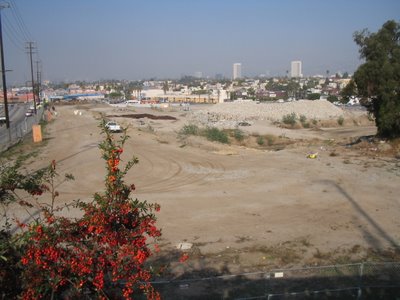 The 518, 800 square foot parcel at the intersection of Venice, San Vicente, and Pico, once the site of a fine mid-century Sears building (last occupied by Builder's Warehouse), could make a dandy, much-needed dog park. The CIM group acquired the parcel in 2003 and are now wooing large retail interests, including The Home Depot. (Never mind the OSH hardware across the street, and the Home Depot locations at Sunset & Wilton, on Wilshire near Alvarado, on Slauson near Western, Slauson & Fairfax, etc.)