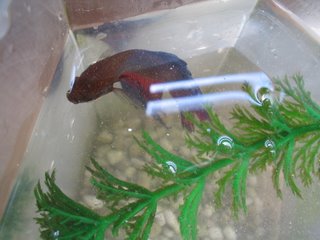 Two weeks ago I adopted a fish, now named Nemo. Nemo and his small fresh water tank was left behind in a West Adams Avenues manse. It's not the first time I've accepted post-sale cast-offs, usually kitchen items or outdoor furniture.

Elsewhere, Parag's purchase closed May 3rd, but the house remained shuttered another week. On Thursday I entered, for the purposes of removing some luan panelling from the entry and stairwell. A window had been left open and a cat had come to roost. Not a feral cat, a friendly, slightly emaciated silver tabby, with a pink collar and a beckoning meow.

Firstly, I was grateful he hadn't penetrated during fumigation. It's not unheard of, for cats mostly, to breach the perimeter of a tent, or become trapped in a crawl space, during the house cover process. When a listing of mine is tenting, I advise the closest neighbors to corral their indoor/outdoor kittys.

Had the sellers ditched their pet, I worried. It happens more than you'd care to know, particularly when the sellers move far away, and more often with cats than dogs. Dogs are abandoned too, but they aren't generally left in the yard, nor are they (as in this case) capable of re-entry. Rather, a gate is inducively left ajar after the dog is stripped of identification (though most haven't any to begin with). 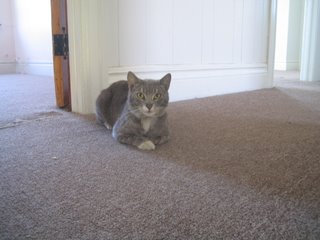 Desperately, I called the listing agent. "Might the sellers", I asked, "be missing a feline friend?"
Sure enough they were, and a few hours later all were reunited.

Machiavelli, as he was known, had disappeared a few days before their move. They'd asked a neighbor to keep watch, and were surprised an agent for the buyer would take such an interest.
"It's either that," I explained, "Or Nemo'll have a new housemate."