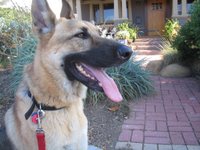 Rocky has been found. In search of the high-life he ventured to Victoria Circle, where he was secured, amazingly by the daughter of an old friend, then taken to a shelter where he was ultimately recovered, after a tip from the mailman. Confusing? That ain't the whole of it.

Rocky was the principal resident of the great Oxford Four-Square, sold earlier this year; and was relocated to another grand project in the Victoria Park area. He'll bunk with me now for awhile, which will only lead to more Nightwalking.