Admittedly the entries have been a little slow coming. Both of my digital cameras are inoperative. The first, I took to SNL camera repair in Marina Del Rey two weeks ago, the other failed two days later. I need image support, darn it. 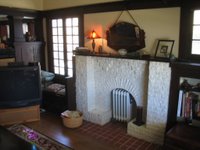 1. The West Park duplex is still available, and has attracted mostly investors and USC people looking to capitalize on its location within the USC employee "incentive zone."
The property could be remade, easily, into an especially large single family residence. A doorway, later converted into a doggie door, and now sealed, formerly connected the two units. This would result in a four bedroom, two bath home with an office or sitting room, living room, dining room, kitchen, utility room, and kitchenette.

2. The Jefferson Park Craftsman is in a holding pattern, with the sellers needing a little more time to prepare.

3. My probate listing in Century Heights, the minimal traditional in Inglewood, is in escrow.

4. My Western Heights listing is receiving its final paint touch-ups, and should be ready for publicity in a week. 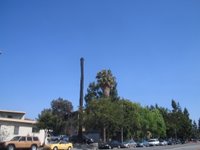 Again, I love the Million Trees Initiative, but I can't stop campaigning. Already, my re-authoring would make tree planting mandatory: every property with an ample lot would have of it required at least one front and back yard tree. My newest twist is a requirement that would involve replacing those palms without foliage crowns. Little good is the palm already, but as a decapitated totem, zip, zilch, nada. 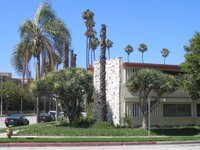 The sloppy Norton Linai apartment building has been encircled by these frond-less matchsticks for years. One apparent resident, probably made uneasy by my questions, claimed he was oblivious to the unflattering truncations. "I don't look up, " he responded warily. Another shrugged, "it's an apartment building, whatcha gonna do?"