I don't typically highlight specific compacts; however, I just completed a transaction, over a year in the making.   I'd like to recognize the principals and express my appreciation.
The buyer, whom I represented, is Beverly Meyer.  The seller was Frederick Johntz, represented by Tom Inatomi of Prudential.  The helpful escrow agent was Patsy Addy of Pickford Escrow.
The deal endured several rounds of negotiation and a lengthy escrow.  A major repair item was included.  The financing took time to arrange, and was far from conventional.  Even personal effects were exchanged. 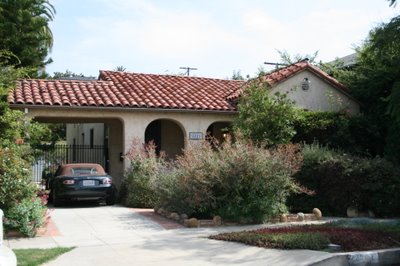 The property, a one-story Spanish Revival was originally built in the Watts area in 1931, and moved to the Jefferson Park neighborhood in the late 1940's, at which time a second bathroom, the arcade entry, porte-cochere, and third bedroom were added.
Real estate dealings are often contentious and embittering; yet this transfer, despite its numerous challenges, was a triumph of negotiation and absolute collaboration.