The varied shingle idiom is amongst the defining characteristics of the late Victorian house styles.
The diamond motif, possibly inspired by playing cards, appears often.

A void, filled inexplicably, by a curtain of vellum.

The term imbrication refers to the overlapping of shaped (patterned) tiles or shingles.
Image left features a diamond, set bindi-like, in a front facing gable.

The Bavarian spirit is alive and well in Adams-Normandie thanks to notched stickwork and scalloped details.

Few examples of the Swiss Chalet Style exist in Los Angeles, and almost all were built during the Edwardian era.
Two principal sub-types can be distinguished.  The first (see image top) combines a low-pitched front-gabled roof, with clipped (or jerkinhead) end, deep eaves, and exposed rafters. 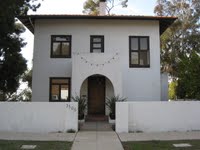 Contrary to architectural mythos, the subordination of ornament--the neue Sachlichkeit--was not first realized in Vienna or Glasgow, Berlin or Oak Park, but in the sleepy, seaside hamlet of San Diego, California, where architect Irving Gill, began practice in 1893, following a brief stint in the legendary Chicago office of Adler & Sullivan. 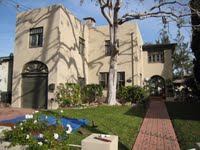 Aided by one of his early partners, William Hebbard (who also emanated from the great Chicago seed pod), and possibly influenced by an early job stabilizing the ruins of the Mission San Diego de Alcala, Gill began offering minimalist interpretations of established styles as early as the late 1890's.  The improvisational Gill may have also gained from "primitivist" Frank Mead, a student of Andalusian forms, who joined the firm in 1905 and with whom Gill briefly partnered in 1907.

Solo by 1908, and pursuing a style without definite historical precedent, the ever inventive Gill who experimented with new materials (concrete, magnesite) and methods (thin wall, tilt-slab construction), was labeled a cubist and a secessionist by an uncomprehending press.

That nothing so fresh was produced along the Eastern seaboard for a whole generation is a manifold cause for astonishment, though perhaps Gill was liberated by San Diego's isolation and freedom from architectural precepts.   While the office building had undergone a streamlining, courtesy of the Chicago gang, Gill's brand of austerity--particularly in the domestic arena--was unprecedented.

Irving Gill's architectural legacy is unmatched in San Diego, where the majority of his projects can be found, and where he died in 1936.  Gill fostered a series of inspired disciples, largely arts and crafts geometricists, including his nephew Louis Gill, Lloyd Wright, Hazel Waterman, and Emmor Brooke Weaver. 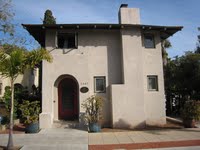 Dates have also been memorialized in wood, on plaques, even stained glass.

When I assume the fantasy position of Building Czar, date inscriptions will become obligatory; and, any facade changes will require notation, such as:
Built in 1914
Re-sheathed in 1972
Window Replacement in 2003
Perhaps commemoration will give pause.

Fleeing the bracing modernity of the Craftsman period, and the techno horrors of the Great War, English country/cottage revivalism--comfort housing, gained favor in the 1920's.

The wavy eave, or eyebrow eave (see Eyebrows Again?! 6/21/2009), a wall/roof junction with a wavy, or undulating profile, often paired with correspondingly shaped doors or windows, helped complete the illusion with a feature-softening come on.

The Acanthus, favored flora of the Mediterranean, first used as ornament by the Greeks,  in the Corinthian and Composite orders, and in many subsequent eras, found favor during the Arts & Crafts period when stylized representations of nature
dominated the decorative arts.

Not uncommonly portrayed in scrolls, and with its caulicoli exposed, alternately spiky or curly tipped, the Acanthus (aka Bear's breeches) appears often as a frieze, tempering bulk (image top).

Some historians, who have have traced the evolution of vegetal garniture, most notably Alois Riegel, claim the acanthus motif is actually a derivation of the palmette, a ubiquitous form in classical decoration.

Please see Topless Turrets (8/10/2009)
A common debate in the old house community is whether preservation is better served by poverty, or prosperity?
The poor, it's supposed, lack the means to alter.  Whereas the prosperous, renovate astride changing tastes.

My contention is, for a time poverty does preserve, but ultimately structure requires maintenance.
Turrets, from the Latin turris, particularly require skilled tradespeople.

A turret projects, and is therefore not to be confused with a tower or any feature integral to the building footprint.

The Tudor Style, so called because it developed during the reigns of the Tudor monarchs, experienced a revival in the United States (and Britain) between 1890 - 1930.

The Tudor Revival, recapitulated several early English building types, even fusing for a time with the Arts & Crafts movement, probably on account of anti-industrial ideals.

Decorative (or false) timbering has succeeded true half-timbering: eight to ten inch timbers, joined by mortise-and-tenon.  The voids between these structural members were filled of a mortar, creating the striped or patterned appearance.

See Sun King (11/30/09) for the beginnings of this thread.
Effusing sunbeams as pediment centerpiece, a refreshingly fluid highlight amidst the strict geometries of the cornice and vergeboard detailing.

A sunburst relief panel bedecks a vent dormer, the architectural equivalent of a diamond stud earring.

Could a crawl space access screen be any more beautiful, convulsive, synthetist-like?

In Roof Returns (May 12, 2009), I featured bargeboards (see also The Devil's in the Thingee March 7, 2008 for a definition of Bargeboard and associated terms) interrupted by chimneys and unusual projections.

I've since collected examples of 'faux fascia', roofing extensions and returns without practical purpose, in service of symmetry, aesthetic pursuits.

These 'bow tie' bargeboards (middle and bottom images) dress a roof/wall junction in dapper fashion.  Crowning a column (middle) and masking a change in mass (bottom).

The image of the radiating sun (referred to variously, from the Baroque period forward, as Sunburst, Sunrise, Sun-in-Splendour, Sunset, and Sun-in-Glory), was the most popular turn of the century decorative motif .

Top image: Classic example in gable, glowingly rendered in gold leaf paint.
Many ancient patterns represented the sun, including the swastika, wheel, and Egyptian sun disc; still, figurative examples are the most common.

More International Style homage, with curtain wall wrap-arounds. More ugliness.  Does this building harbor residences, offices, or civic endeavors?  Modernism's extreme formality eschews the value of distinguishability.
But back to the impoverishment of architecture (see Sub Modern Part One), and the alibis of the art agnostics: "It's too expensive to build the old way".

It isn't necessarily "too" expensive, but choicer materials and refined finishes cost more, regardless of style.  Once consumers, the consortiums, civic leaders, university regents, and mom 'n' pop home buyers accepted minimal forms, be they graph paper-y skyscrapers, or the mass produced post-war housing of Levittown, the die was cast.
Assembly line home building, minimal ersatz, and the machine aesthetic would forever be promoted, the sometimes lesser

costs hailed; the traditional picturesque dismissed, as impractical, even vulgar.
When did simplicity become a correlate of potency?

Transitional, the favorite catchword of the Architectural Historian, describes those works betwixt and between, when new styles are in their infancy, while elements of the preceding period endure.

These columns from the Edwardian period (and the Angelus Vista neighborhood), epitomize one such transition, from the decorative finish emphasis of the 19th century to the elemental, materials emphasis of the Craftsman period.

Before the simplification of forms, turrets made corners a point of interest, emblems of spectacular craftsmanship and ambition.
Those architectural features most unique are frequently the most expensive to maintain.  Many turrets have been shamefully re-clad or beheaded--stripped of their essentials.

The Witch's cap or Candle-Snuffer roof remains (second image), though the fenestration has been depredated by an aluminum skin.
In high occupancy situations, sometimes turrets, meant to function as adjunct sitting rooms--offering the grandest views, are converted to closets. 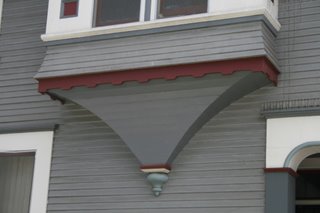 No bartizan this (an overhanging lookout in a battlement), but still the evocation of crenellations, inverted, as a molding at the skirt of a salient feature, or oriel.